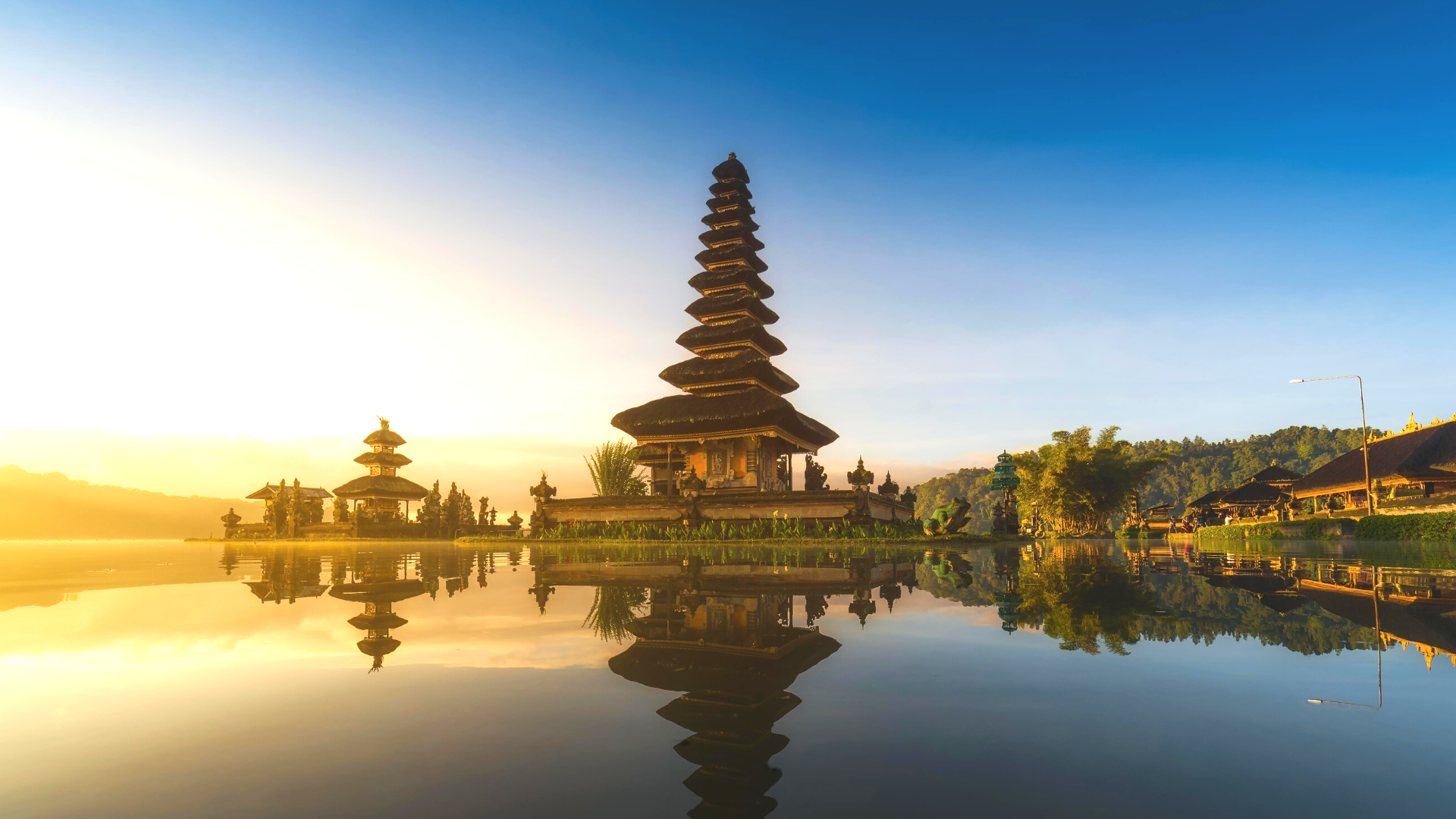 FLATTER TO DECEIVE OR

CAN IT FINALLY FULFIL ITS PROMISE ?

South-East Asia (ASEAN) has outperformed global, Asia and even the US markets so far this year as at 31 May 2022, after a period of underperformance since 2013. The key question we have been getting lately is whether ASEAN can finally sustain its outperformance or is it simply a false start? 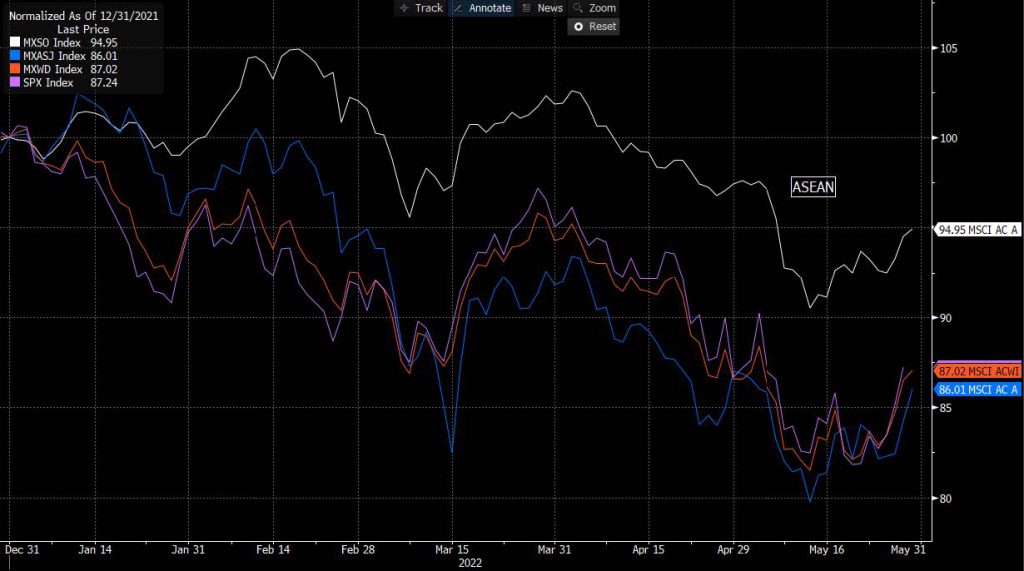 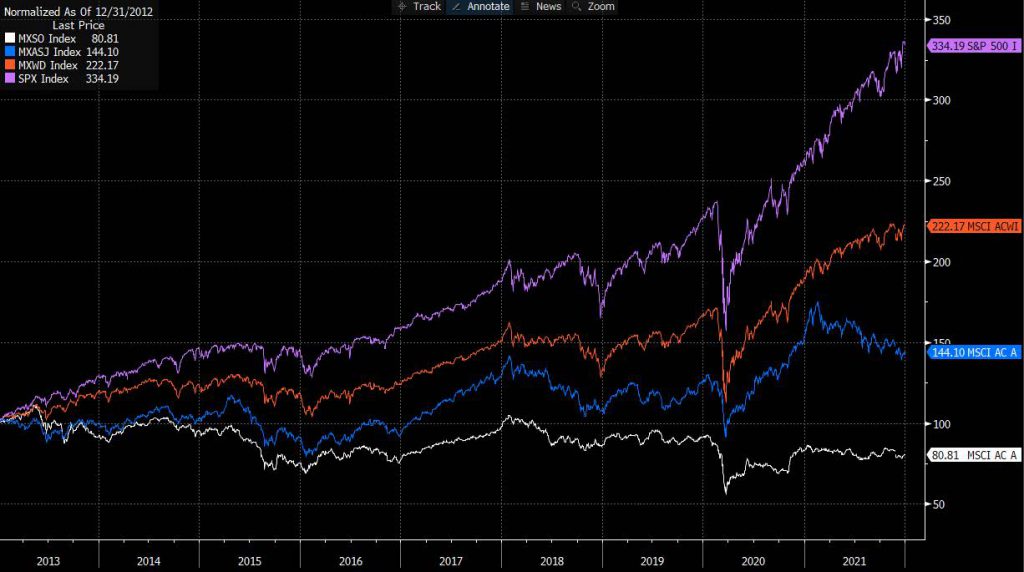 Global market volatility has been rising due to a confluence of factors including the Russia-Ukraine war, concerns over inflation, supply disruptions, rising interest rates to combat inflation, contraction of liquidity as central banks start shrinking their balance sheet and fears of stagflation or recession. Amidst all these, ASEAN has managed to outperform given its largely domestic orientation and perceived safe haven status. The region has been fairly resilient and shielded from all these global concerns except for the impact of higher energy and food inflation. We expect ASEAN to continue its outperformance as the region finally re-opens and emerges from the devastation caused by Covid-19 in the last 2 years. Longer term, we do believe ASEAN can fulfil its long term growth potential.

2022 has been and will continue to be the year of re-opening for ASEAN. The region has decided to live with Covid-19 and treat it as an endemic with all the countries removing most of the restrictions imposed during Covid and opening their international borders. As a result, domestic activities have largely resumed and mobility has recovered with some countries like Indonesia and Philippines even seeing mobility higher than pre-Covid levels, as seen from the mobility data charts below.

With domestic activities largely back to pre-Covid levels and international travel resuming, we expect economic activities in ASEAN to recover strongly as seen from the PMI indices in ASEAN and this should translate into stronger economic growth for the region.

We expect ASEAN GDP to grow more than 5% this year which will be the first time it is expected to outgrow China since 1990.

Figure 6: China has been growing faster than ASEAN over the past three decades 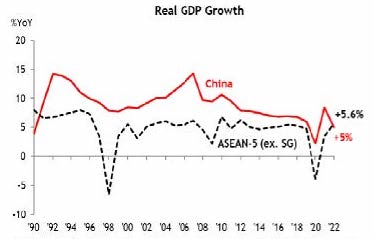 Source: Maybank Research, as at January 2022

Although ASEAN does get impacted by higher inflation especially from higher energy and food prices, not all countries get impacted in the same magnitude. Indonesia and Malaysia, being local food producers like palm oil and net exporter of oil and gas, are largely insulated while the energy importing countries of Philippines, Singapore and Thailand are negatively affected. Nevertheless, we believe the re-opening of economies and recovery of economic activities have a more meaningful positive impact on growth and this should result in the continued outperformance of ASEAN markets at least for this year.

We are still structurally positive on ASEAN longer term as the region is one of the fastest-growing economic blocs globally underpinned by the structural trends of favourable demographics, rising middle income class, urbanisation and digital revolution. In fact, ASEAN is expected to double its size to become the 4th largest economic bloc after the US, China and EU in the next decade if it can fulfil and grow at its potential.

Source: Maybank Research, as at January 2022

With a total population of more than 600 million people, ASEAN is already the world’s 3rd largest consuming market. Coupled with a growing working age population, we expect the emergence of the middle-income class which is expected to double in size by 2025 from 2010, to drive consumption further. Urbanisation will also accelerate as this middle-income population expand rapidly especially in secondary cities of Indonesia, Philippines, Vietnam and Thailand. Infrastructure spending and development will thus be required to keep up with this urbanisation with an estimated USD2.2 trillion of infrastructure investment needed. 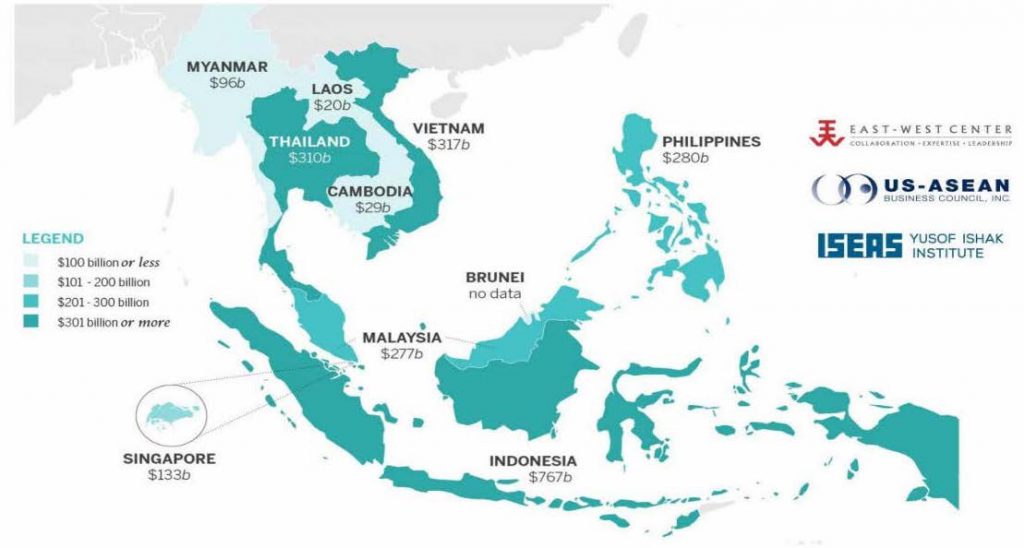 The advent of technology together with rising income and a young population in ASEAN have seen digitalisation and adoption of technology taking off rapidly. There are already more than 400 million internet users in ASEAN which is almost the entire population of the EU. New users are coming online at a fast pace with 40 million new Internet users added in 2020 alone compared to 100 million added between 2015 and 2019, according to a study by Temasek and Google. In addition to new online users, Covid-19 led to an acceleration of digital consumption as users tried new digital services for the first time with more than 1 in every 3 digital services being new services. Thus, ASEAN’s internet economy is expected to more than double in size from USD117bn in 2020 to USD363bn in 2025 which will create many opportunities and power ASEAN’s economy at the same time. 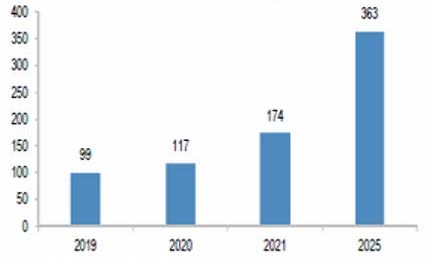 Source: JPM Research, as at December 2021

We are positive on ASEAN especially Indonesia which we believe offers the most attractive macro and micro story in Asia in 2022. Foreign investment in Indonesia equities have been growing which is a reflection of the positive reforms and changes President Jokowi and his team have made to the country including improving the investment climate through the establishment of the Omnibus Laws and setting up the first sovereign fund, INA to invest in strategic projects in Indonesia. Credit growth is also picking up nicely as economic activities resume.

Source: Jefferies Research, as at June 2022

Source: Jefferies Research, as at June 2022

Indonesia’s sustained efforts to down-stream its resource export sector is also finally bearing fruits which has the potential to transform its export mix significantly in the mid to long term through higher export content value. The government has been using a combination of export bans of unprocessed ores like nickel and investment incentives to encourage miners to process these ores into higher value-added products. This strategy has resulted in the surge of the country’s exports which we think is sustainable and will likely change the perennial current account deficit into a surplus with a positive impact on the rupiah.

Sector wise, we are positive on cyclical companies in the industrials and hospitality sectors that we believe can continue to do well with the re-opening of ASEAN. We are also positive on the banks in this region as we expect them to benefit from higher interest rates and loan growth generated from the pick-up in economic activities. We also have some exposure in the materials sector to capture the rising commodities trends. We remain invested in some of the companies that are expected to benefit from the secular trends in ASEAN especially technology adoption and climate change. 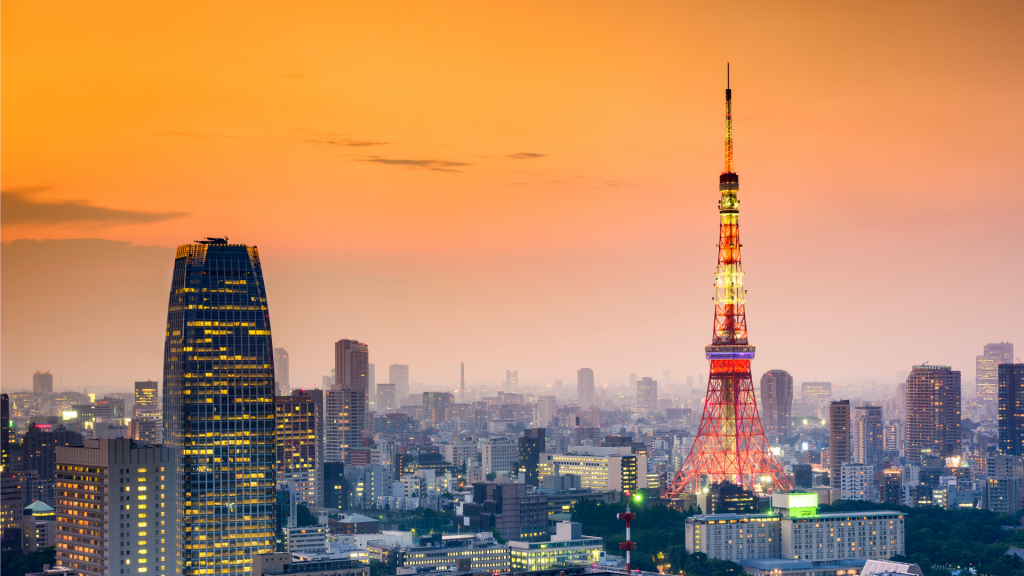 “I will be there, and everywhere. Here, there and everywhere.” – The Beatles   Artificial Intelligence (AI) is the heart of technological revolution today. The

Artificial Intelligence (AI) is a hot topic in the asset management world with potential applications to portfolio management, trading and risk management. As active managers 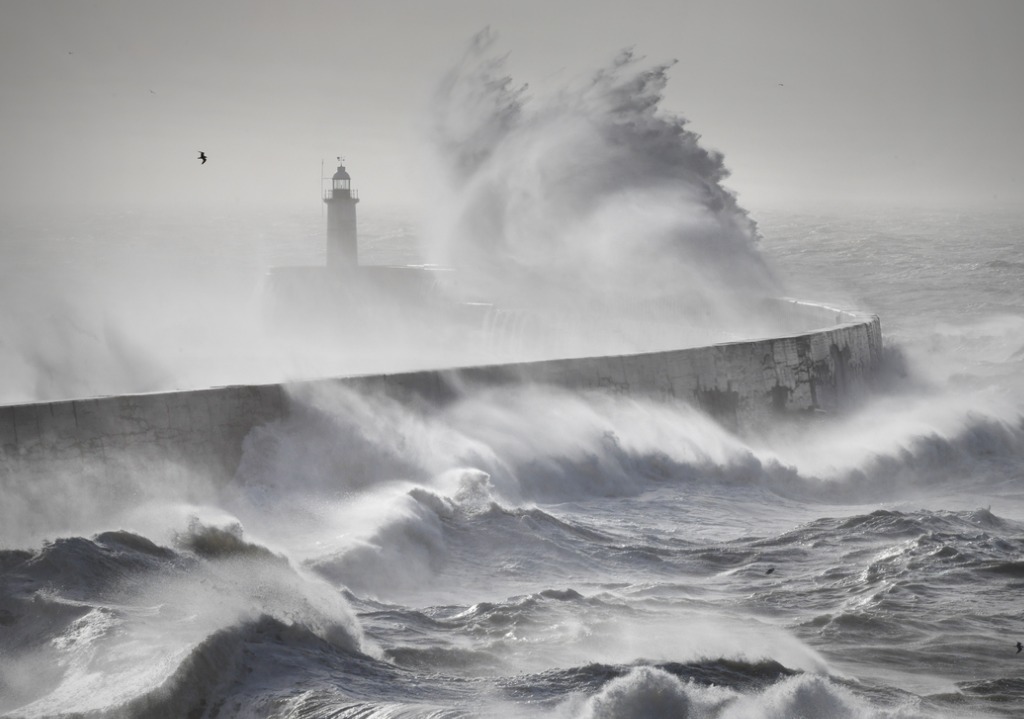 FLATTER TO DECEIVE OR  CAN IT FINALLY FULFIL ITS PROMISE ? South-East Asia (ASEAN) has outperformed global, Asia and even the US markets so far 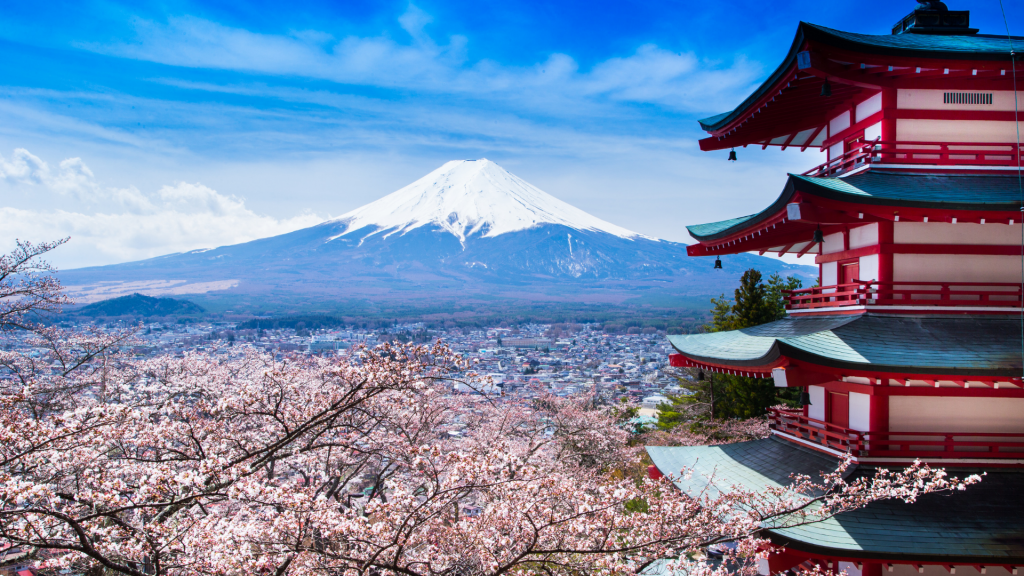 FORGING AHEAD In the Upper House election held on July 10, the ruling party coalition won 76 seats and the Liberal Democratic Party (LDP) won 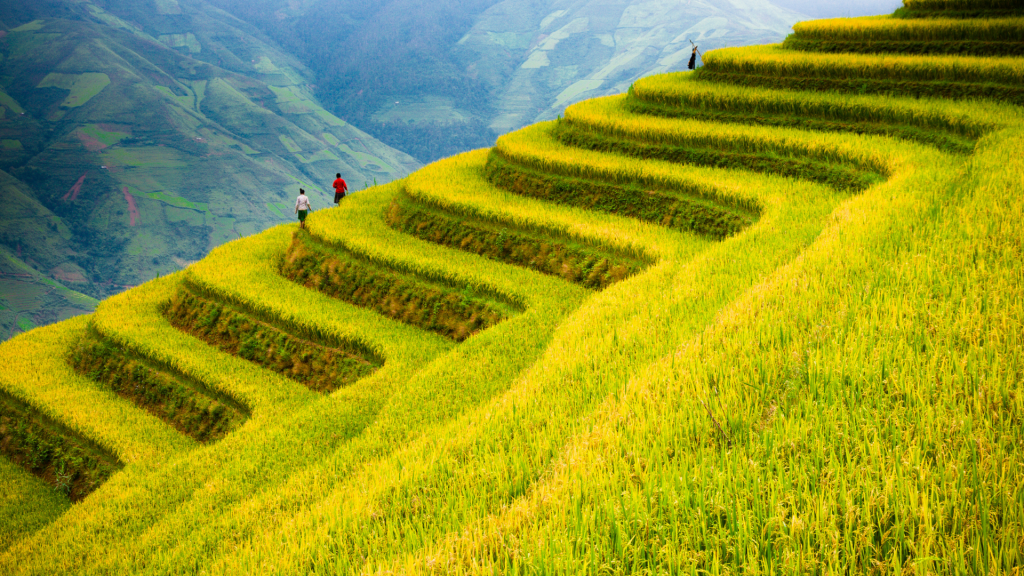 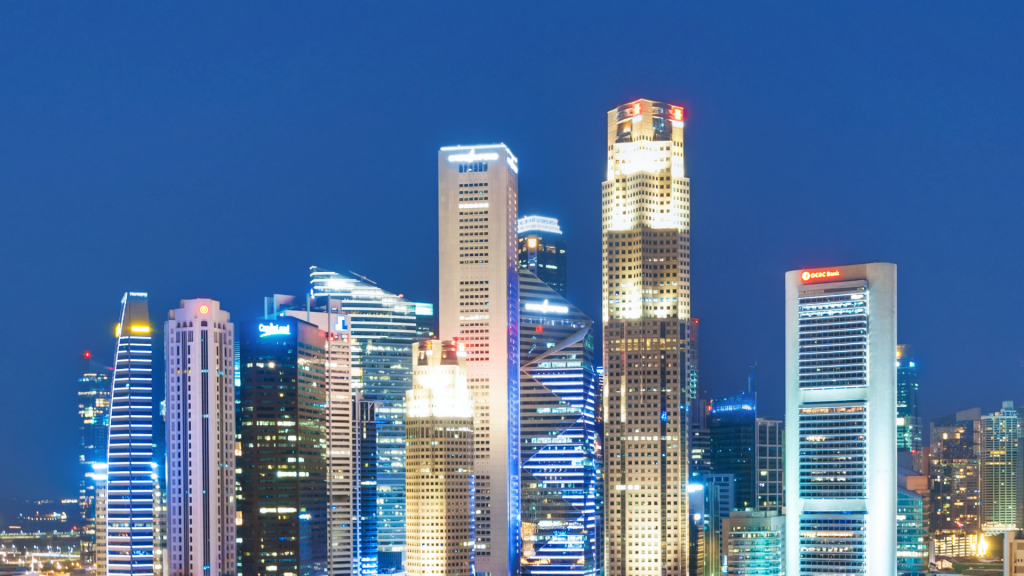 What is the difference between a Unit Trust and an ETF? Both Unit Trusts (also known as Mutual Funds in the United States) and ETFs

This advertisement or publication has not been reviewed by the Monetary Authority of Singapore. It is for information only, and is not a recommendation, offer or solicitation for the purchase or sale of any capital markets products or investments and does not have regard to your specific investment objectives, financial situation, tax position or needs. Investments in the products mentioned herein are not obligations of, deposits in, guaranteed or insured by LGI or any of its affiliates and are subject to investment risks including the possible loss of the principal amount invested. You may wish to seek advice from a financial adviser before making a commitment to undertake any investment. In the event that you choose not to seek advice from a financial adviser, you should consider carefully whether the investment is suitable for you.

The information presented herein is for illustrative purposes only and should not be considered reflective of any particular security, strategy, or investment product. It represents a general assessment of the markets at a specific time and is not a guarantee of future performance results or market movement. Any opinions, projections or forward-looking statements expressed herein or information presented (which includes estimates, graphs, charts, formulae or devices) is subject to change or correction at any time without notice and is not to be relied on as advice. You are advised to conduct your own independent assessment and investigation of the relevance, accuracy, adequacy and reliability of any information contained herein and seek professional advice on them. No warranty is given and no liability is accepted for any loss arising directly or indirectly as a result of you acting on such information.

This publication is not intended for use by any person other than the intended recipient and may not be reproduced, distributed or published without prior written consent of LGI. This publication may not be distributed in any jurisdiction or to any person where such distribution is prohibited (including Canada, Japan, the United States of America) or to US persons (as such term is defined in Regulation S under the US Securities Act of 1933).

©Lion Global Investors® Limited (UEN/ Registration No. 198601745D) is a Singapore incorporated company, and is not related to any asset or fund management entity that is domiciled in Europe or the United States.